These issues are only available in the Members Only section. 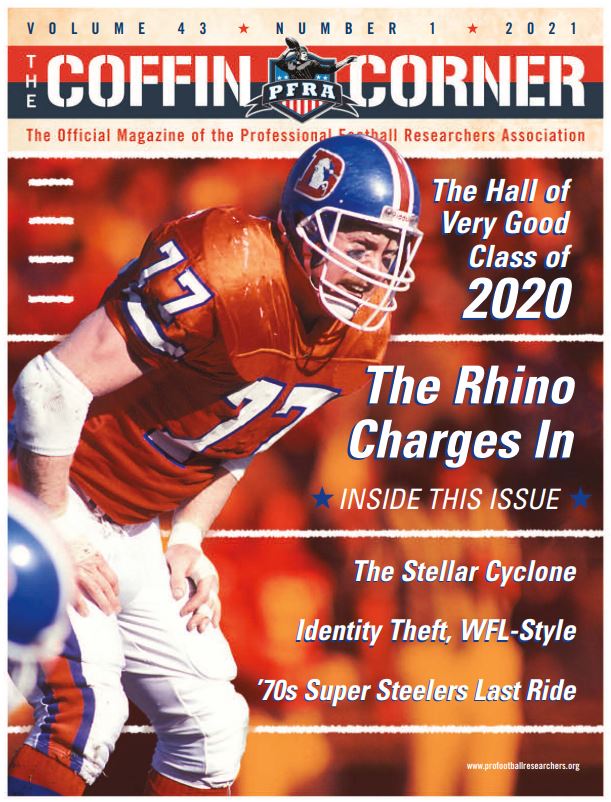 PFRA-ternizing. The 2021 convention at the Pro Football Hall of Fame is on for June 24–27 this year and organizer George Bozeka gives us an update on the hotel, speakers and activities planned. Announcements are also made on the next book in the PFRA’s Great Teams series and the promotion of Denis Crawford to managing editor of the Coffin Corner.

Tom Watkins: From College All-American to Stellar NFL Halfback by Jim Sargent. A short biography of the Iowa State great—and member of the famed 1959 ‘Dirty Thirty’ Cyclones team—who went on to pro football, playing for the Cleveland Browns, Detroit Lions, and Pittsburgh Steelers. He also starred as a return specialist, leading the NFL in punt returns and yardage in 1963.

A Case of Identity Theft, WFL-Style by Mark Speck. The curious case of George Myers (a.k.a. John Meeger), a linebacker/con artist who fast-talked his way onto the roster of the Word Football League’s San Antonio Wings, was then fired, and drove out of town in a vehicle fraudulently purchased from a car dealer. After trying the same trick with the NFL's Falcons, Broncos, and 49ers, he was finally tracked down in Atlanta by the FBI.

The Last Ride of the 1970s Super Steelers by Jimmy Grant. A recounting of the 1982 Pittsburgh team that played strong in a strike-shortened season, entered the so-called Super Bowl Tournament with high hopes, only to lose in the first round against the San Diego Chargers, unofficially marking the end of their Seventies dynasty. 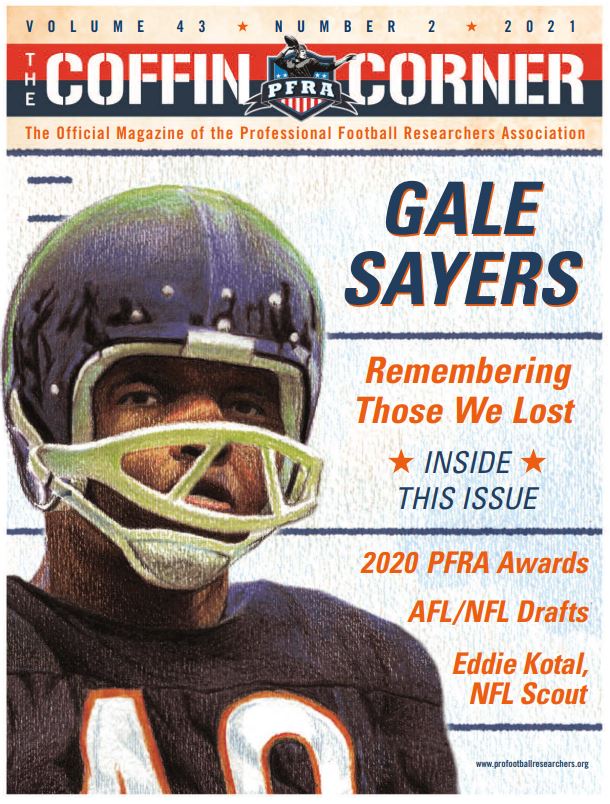 PFRA-ternizing. Executive Director Mark L. Ford presents his annual “State of the PFRA” report to members and discusses the issues faced by the organization during the pandemic; the increase in membership, social media presence and revenue; and the upcoming convention at the Pro Football Hall of Fame. A detailed itinerary for the 2021 convention is also included.

Par for the Course: Quantifying the AFL/NFL Drafts from 1960–66 by Kent Stephens. An analysis of the seven competitive player drafts between the rival leagues before the common draft era and the author's method of evaluating the success of the upstart AFL in signing the top talent out of college.

Eddie Kotal: The Experiences that Shaped the First Full-Time NFL Scout by Ryan C. Christiansen. A short biography of the pioneering scout for the Green Bay Packers and Los Angeles Rams, whose career as a player and coach influenced the methods he developed to find and evaluate college players in the days before BLESTO and the NFL Scouting Combine.

2020 Player Deaths. A list of the pro football players who died last year, including information on the team(s) they played for, the date and location of their death (if known) and their age when they passed away. 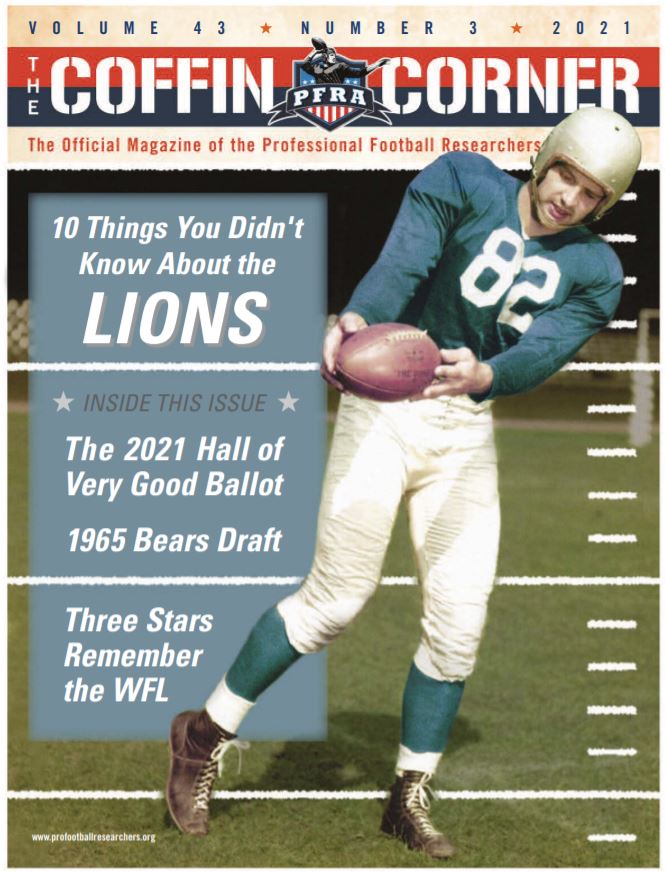 PFRA-ternizing. The cover for The 1951 Los Angeles Rams: Profiles of the NFL’s First West Coast Champions, the third in the Great Teams in Pro Football History series, is unveiled, as is a pre-order discount for the book to be released later this year. Also, there's a special "thank you" to PFRA member Richard Bak, who compiled a complete article index of the entire run of the Coffin Corner, from 1979 to 2021, alphabetized by author.

Official 2021 Hall of Very Good Ballot. NOTE: The deadline for submitting your ballot is October 31, 2021.

The Chicago Bears’ 1965 Draft: Sayers and Butkus Enter the NFL by Bryan Dietzler. There are those who say that the greatest draft the Bears ever had was in 1983, a draft that produced seven starters on the 1985 Super Bowl champions. That may be, but it's hard to beat the back-to-back picks Chicago made in Round 1 of the 1965 draft—two Hall of Famers that could be considered the best to ever play their positions.

Ten Things You Probably Don’t Know About the Detroit Lions by Randy Snow. A Top 10 list of trivia about the team formerly known as the Portsmouth Spartans. The Lions may not have won a Super Bowl, but how many franchises can boast an astronaut, two backup singers on a gold record hit and seven Heisman winners as former players? "I'll take 'Motor City Minutiae' for $200, Alex.”

Three Former Stars Remember the World Football League. by Kenn Tomasch. Gary Danielson, John Dockery, and Bob Gladieux reminisce about their playing days for the New York Stars/Charlotte Hornets of the wild and wooly WFL in this question-and-answer piece. If there's a lesson to be learned in this, it's probably best if you know the chain of custody of your chewing tobacco. 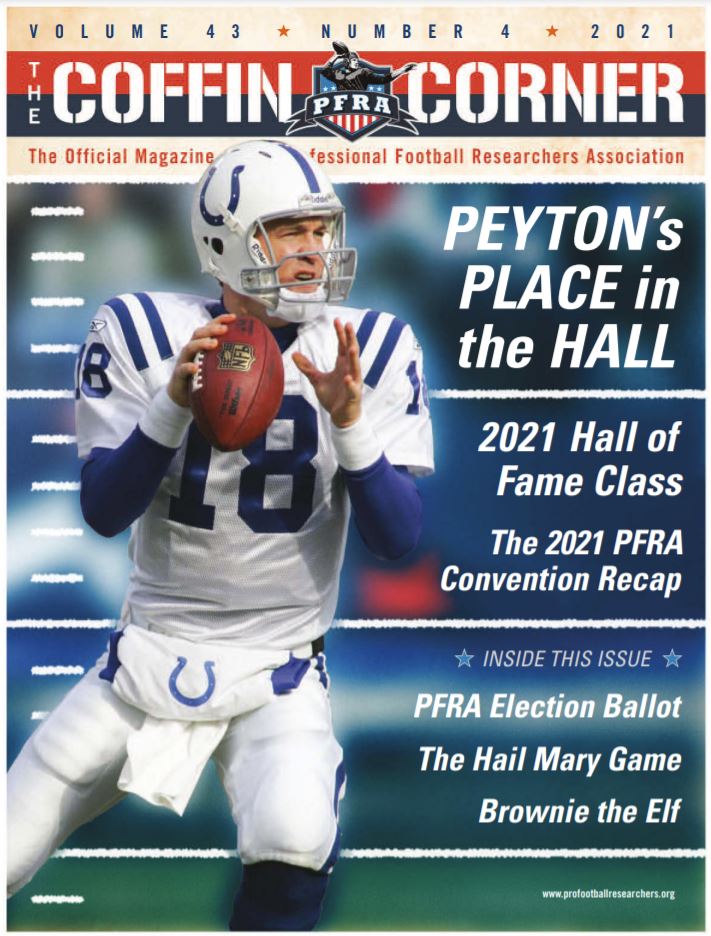 PFRA-ternizing. by George Bozeka. The organizer for the 2021 convention recalls the highlights of the weekend in Canton, Ohio and at the Pro Football Hall of Fame. The theme of the convention, which was rescheduled from 2020 because of the COVID-19 pandemic, was the 100th anniversary of the founding of the NFL.

Official PFRA Elections Ballot. Note that the deadline for voting is December 1, 2021.

More Than Just a Prayer by Perry Mastrocola. A look back at the 1975 playoff game between the Dallas Cowboys and the Minnesota Vikings that was more than just the Hail Mary pass from Roger Staubach to Drew Pearson at old Metropolitan Stadium.

Brownie the Elf: Where Did It Come From and Is It Still Relevant? by Barry Shuck. What's a brownie? What's an elf? And what's the difference? Take a deep dive into the history of the Cleveland Browns original mascot, its roots in Old World folklore, its use in representing the team in both the AAFC and the NFL, its demise, and its comeback. 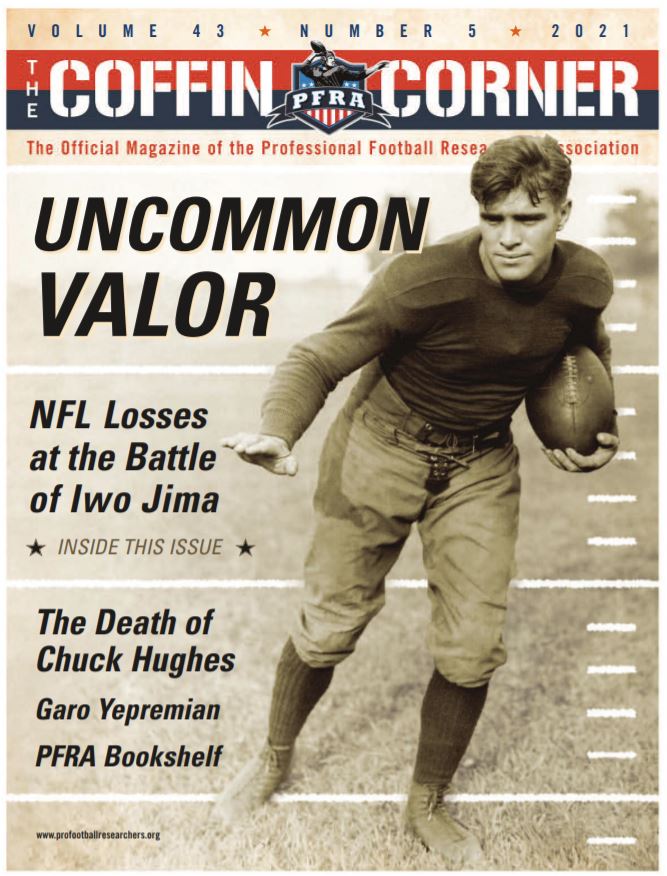 PFRA-ternizing. The Board of Directors submits bylaw amendments for approval to the PFRA membership. A ballot is included with a deadline of May 1, 2022, for voting.

The Death of Chuck Hughes and Its Impact on NFL Medicine by Denis M. Crawford. A remembrance of the Detroit Lions receiver on the fiftieth anniversary of his death during a game and the changes this medical emergency brought about to not just the NFL, but to competitive sports at large.

Garo Yepremian Kicks Off Miami’s AFC Three-peat by Robert Stevenson. The undersized Cypriot kicker who never played college football before he tried out for the NFL may best be remembered for his errant pass that led to the lone Washington touchdown in Super Bowl VII, but he was a key cog in the Miami machine that won three AFC titles and two Super Bowls in the Seventies, as this short (no pun intended) biography shows.

2021 PFRA Bookshelf by John Maxymuk. The annual bibliography of pro football books published this year, including those by PFRA members Denis Crawford, Jeff Miller and Greg Tranter, and the late Rupert Patrick. 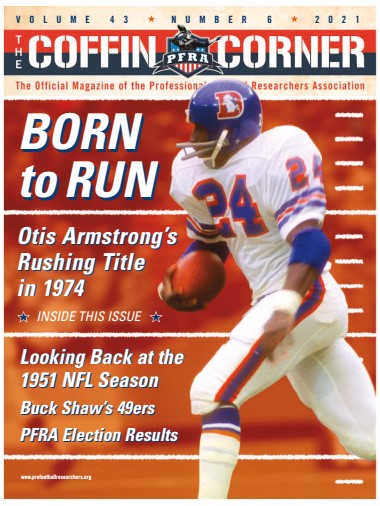 PFRA-ternizing. The results of the 2021 PFRA election are officially announced, an update on the upcoming book in the PFRA Great Teams series, and a fond farewell to Ken Crippen and Mark Ford, the dynamic duo of the PFRA management team, as they wind up their terms.

Otis Armstrong: A Season to Savor by Joe Zagorski. A game-by-game recounting of the unexpected 1974 season from the diminutive Denver Broncos running back who stole the league rushing title that year from the dominant days of the Buffalo Bills' O. J. Simpson.

1951 NFL Season in Review by Andy Piascik. A look back at the incredible NFL season 70 years ago as twelve teams battled for the title. Four teams from the National Conference (the Rams, Bears, Lions and 49ers) fought until the final day of the regular season for the top spot, and a new rivalry emerged between the Browns and the Giants in the American Conference. At the end of the year the Rams met the Browns in the first NFL Championship Game to be nationally televised. Top games and individual performances are also highlighted.

Buck Shaw’s San Francisco 49ers by John Collins. The tenure of the Niners head coach for nine years is discussed and reevaluated as Shaw guided the franchise throughout their time in the AAFC and into their early years of the NFL, fielding competitive teams but always falling short, including six second place finishes.