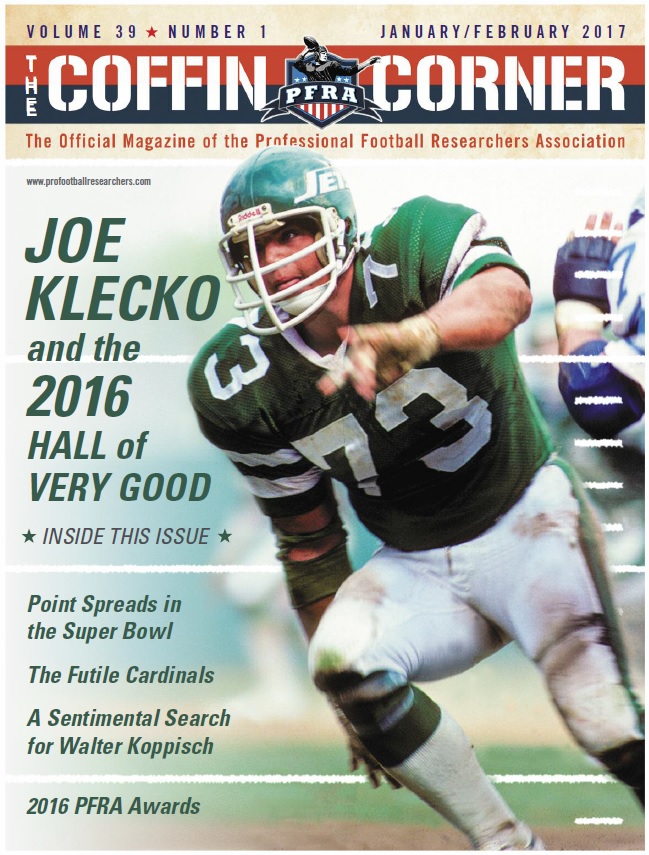 PFRA-ternizing The executive director gives his state of the PFRA address, listing the accomplishments of the organization for last year and looking ahead to the future, including the announcement of the site for the biennial meeting in 2018.

2016 PFRA Awards The winners are officially announced with Mark L. Ford receiving the Ralph Hay Award for lifetime achievement, James C. Sulecki as the recipient of the Nelson Ross Award for his book The Cleveland Rams: The NFL Champs Who Left Too Soon, 19361945 and Kenn Tomasch winning the Bob Carroll Memorial Writing Award for his article Then and Now: The Demographics of the NFL in 1941 and Today.

Super Spreads: A Brief History of Point Spreads in the Super Bowl by Mark L. Ford. A quick introduction to the types of wagering in pro football and a recounting of the betting lines for each of the first fifty championships during the Super Bowl era, including a table of point spreads and final results from Super Bowl I to Super Bowl 50.

1,4411: Measuring Football Futility by Doug Bigelow. The sad tale of one of the most hapless teams in NFL historythe Chicago Cardinals of the early to mid-forties, who went through most of World War II, or 1,441 calendar days, with only a single victory.

Sentimental Journey: In Search of Walter Koppisch by Jeffrey J. Miller. A nostalgic trip back to western New York with a niece and other relatives of former Buffalo Bison Walter Koppisch to the neighborhood and school of the early NFL player, including a visit with Sam Smoke Dana, the oldest living player at the time. 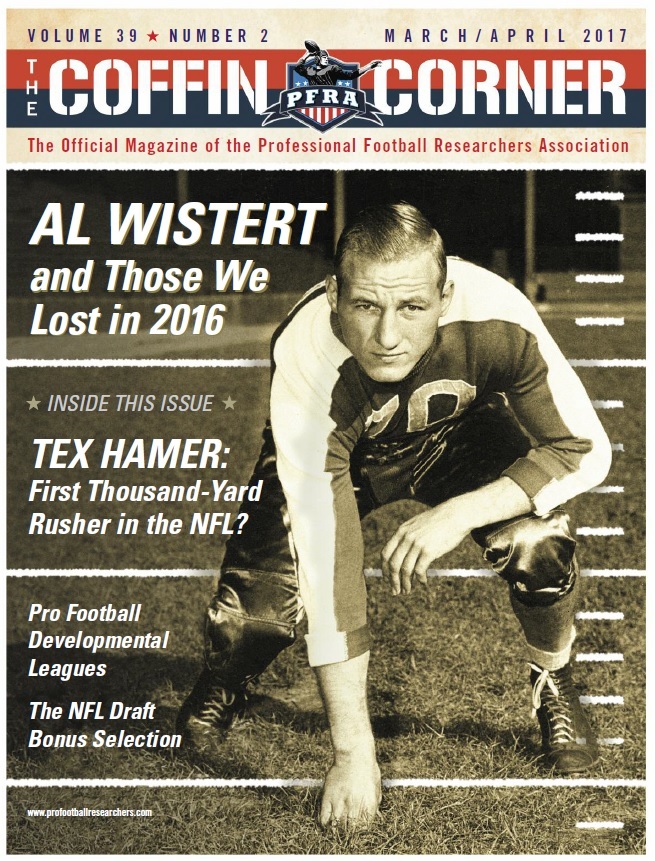 PFRA-ternizing. The official naming of Buffalo, New York as the location for the organizations 2018 convention, a preview of the second annual meeting of the PFRAs Western New York chapter and the announcement of a new book, The All-America Football Conference: Players, Coaches, Records, Games and Awards, 19461949, coming this fall from PFRA Publications.

Who Was Really the NFLs First 1,000-Yard Rusher? The Case for Tex Hamer by John Wilke. An exploration of the Frankford fullbacks 1924 season and the possibility that he ran past the thousand-yard barrier that year. Newspaper accounts of the Yellow Jackets games are used to fill in gaps in the statistical record as well as extrapolations from the unofficial statistics compiled in the The Football Encyclopedia.

2016 Player Deaths. A list of the pro football players who died last year, including information on the team(s) they played for, the date and location of their death (if known) and their age when they passed away.

The Bonus Selection System in the NFL Draft, 19471958 by John Maxymuk. A short overview of the twelve-year history of the bonus pick in the draft including the reasons for its existence, a table of each player selected with the pick along with other notable players in that year, the order of teams being awarded the bonus and the systems eventual demise. 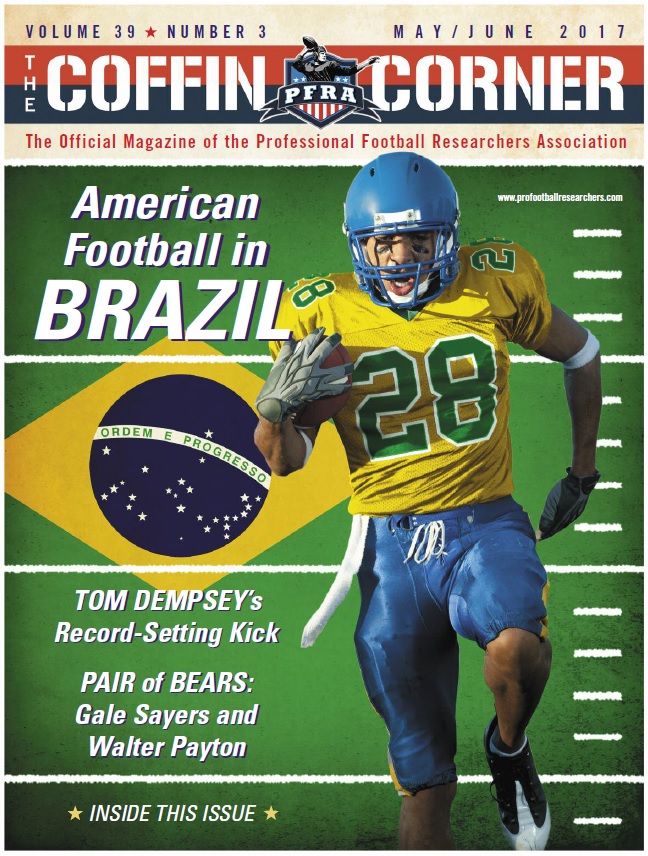 Tom Dempsey and the Record Kick That Almost Didnt Happen by Neal Golden. A look back at one of the most famous field goals in NFL history and the unlikely events that led up to the kick, through the eyes of a New Orleans writer.

A Pair of Bears: Two Chicago Running Backs and Their Record-Setting Days by Bryan Dietzeler. A twin tale of Bears rushersGale Sayers and Walter Paytonand the separate dates they both made pro football history.

Futebol Americano: American Football in Brazil by Alan Santiago. An introduction and short history of the gridiron game in the South American country, including a look at the game's status today with an examination of the highest level of football in Brazil and a list of champions from the top two divisions. 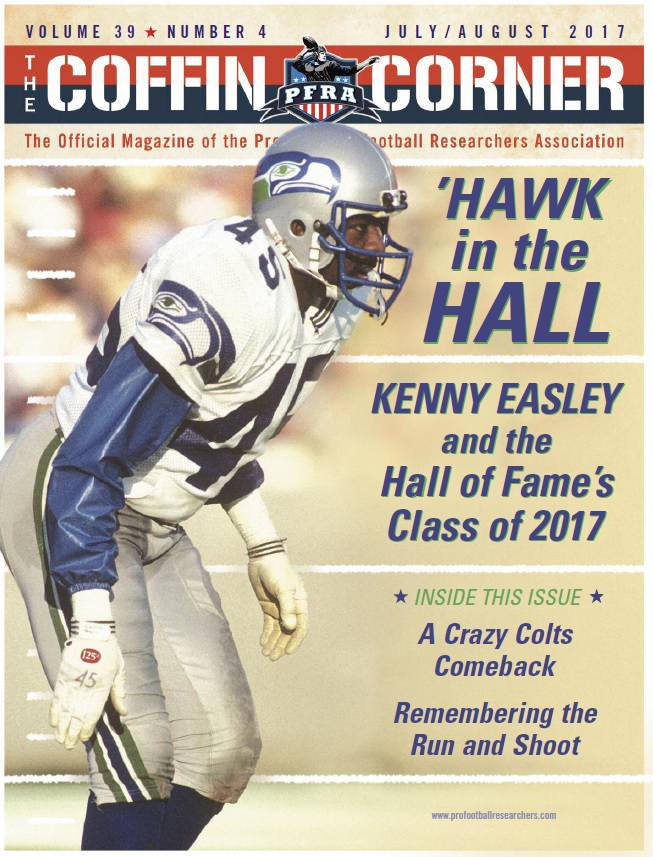 PFRA-ternizing. An announcement on next year's national PFRA convention in Buffalo including details on the official hotel and featured speakers in attendance.

The Class of 2017 by the Pro Football Hall of Fame. Highlights, statistics and awards from the football careers of the seven members in this years Hall of Fame classMorten Andersen, Terrell Davis, Kenny Easley, Jerry Jones, Jason Taylor, LaDainian Tomlinson and Kurt Warner.

Monday Night Miracle in Massachusetts: The Incredible Colts Comeback in 1978 by Joe Zagorski. A look back at one of the more thrilling games of the decade when a moribund Baltimore team caught fire in the fourth quarter and upset the New England Patriots, the eventual AFC Eastern Division champion that year.

In Fond Memoriam: The Run-and-Shoot Offense by Ted Kluck. A brief introduction and history of the wide open run-and-shoot offense including it's adoption by the USFLs Houston Gamblers and the NFLs Houston Oilers and speculation on its return. 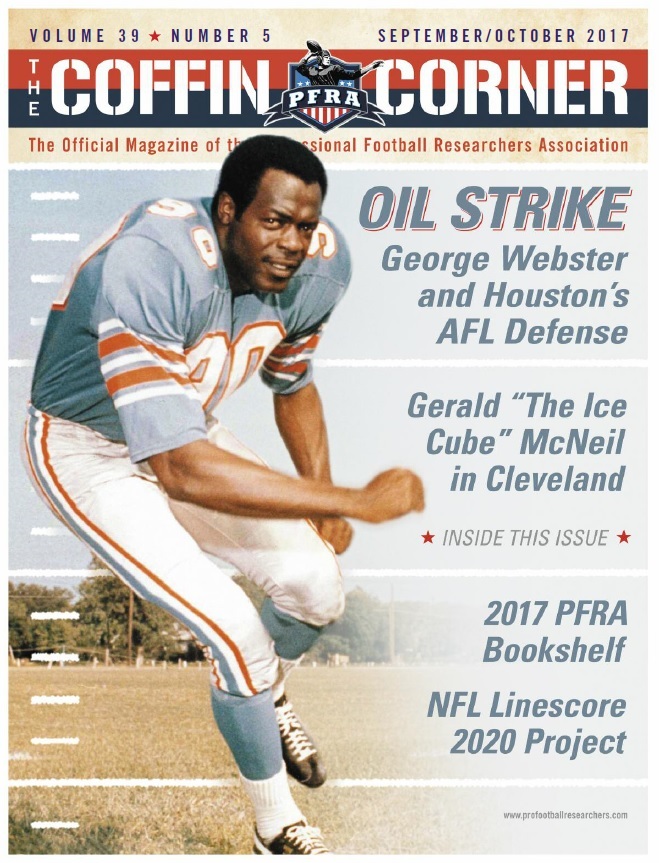 PFRA-ternizing. An announcement on the Linescore 2020 project coinciding with the NFLs 100th season, a note on PFRA secretary Lee Elders interview on the Sports Forgotten Heroes podcast produced by new PFRA member Warren Rogan and an update on next years national convention in Buffalo.

A Well-Oiled Defense Strikes It Rich in Houston by Ed Gruver. A look back at the surprisingly stout Oilers defense in the waning years of the AFL from 1967 to 1969 and the stars that formed the teams nucleus with players like Garland Boyette, George Webster and future Hall of Famer Ken Houston.

Big Things in Small Packages by Roger Gordon. The life and football career of Cleveland Browns wide receiver and kick returner Gerald McNeil, nicknamed The Ice Cube, including his playing days in high school, college and the USFL.

2017 PFRA Bookshelf by John Maxymuk. A bibliography of books on professional football (with a few notable exceptions) published or scheduled to be published in 2017, with highlighted titles by PFRA members and the PFRA. 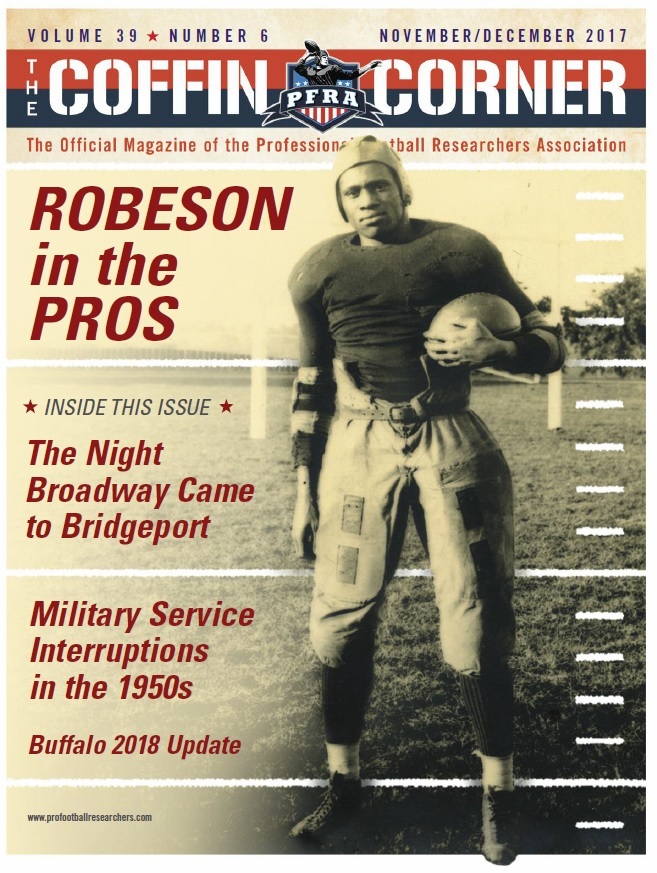 PFRA-ternizing. An update on the 2018 PFRA Convention in Buffalo, New York including details on the official hotel and featured speakers in attendance and a call to members for their feedback by the PFRA board members and management team.

The Night Broadway Joe Took His Act to Bridgeport by Andy Piascik. A look back at the 1967 preseason game between a rising star of the AFL, Joe Namath, and his ascendant New York Jets against another nearby team, the Boston Patriots, played one summers eve in Bridgeport, Connecticut.

Inducting the NFL: Military Service Interruptions in the 1950s by John Maxymuk. A study of the effect of military conscription on the NFL in the decade that saw both the Korean and Cold Wars and including a comprehensive list of over 250 players who had their professional careers shortened by service in the armed forces.

The Pro Football Career of Paul Robeson by Joshua Anderson. A detailed examination of the famed actor, singer and activists playing days in the early NFL covering his time with the Akron Pros in 1921 and the Milwaukee Badgers in 1922, including extensive contemporary news accounts and research notes.