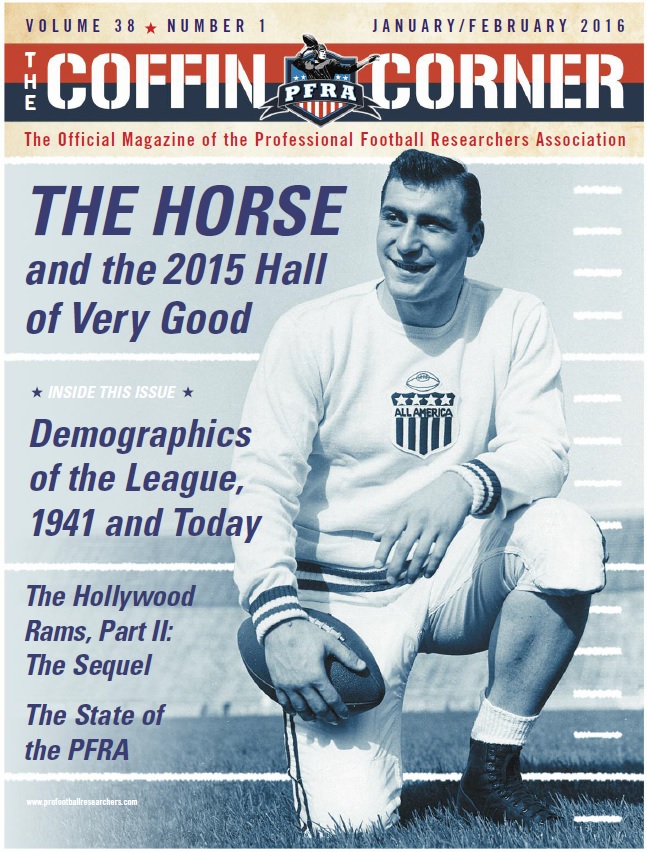 PFRA-ternizing The executive director gives his state of the PFRA address and looks ahead to 2016, including his thanks to the officers and management team of the PFRA. The 2015 PFRA award winners are also announced with Jack Clary as the Ralph Hay winner, Ted Kluck for the Nelson Ross and Doug Bigelow winning the Bob Carroll Memorial Writing Award.

Then and Now: The Demographics of the NFL in 1941 and Today by Kenn Tomasch. A comparative study between the population of NFL players from just before World War II to the players from the 2014 season, including statistics such as age, body size, college attendance and geographic factors.

The Hollywood Rams, Part II: The Sequel by Mark L. Ford. The author revisits his previous article on the film and TV careers of Hollywoods closest NFL team and presents his all-star lineup of the greatest entertainers and players for the Rams franchise while they were in Los Angeles from 1946 to 1979. 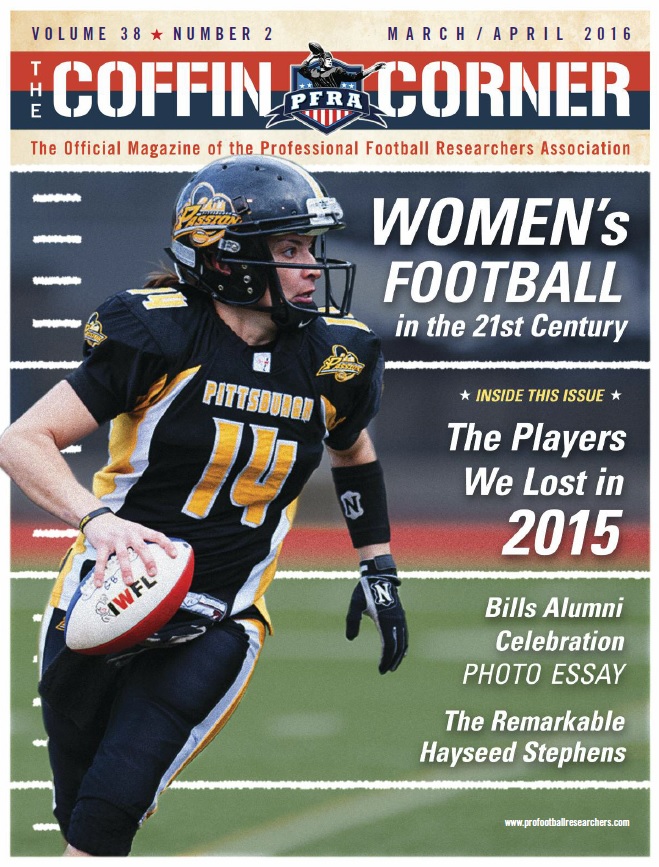 PFRA-ternizing An announcement on the second book in the PFRAs Greatest Teams in Pro Football History series featuring the 1958 NFL champion Baltimore Colts and a call for writers and editors to help on the project. There is also an update on the 2016 Green Bay meeting itinerary including a list of speakers that features two members of the 1966 Packers team that won the first Super Bowl.

Passion for the Game: Womens Football in the Twenty-First Century by Neal Rozendaal. This brief history of womens professional football since 1999 looks at the explosion of leagues that took place in the early part of this century, the gradual winnowing process that has occurred since then and the rise and dominance of three leaguesthe WFA, the IWFL and the WSFLtoday.

The Remarkable Hayseed Stephens by William J. Ryczek. A short biography of Harold Hayseed Stephens, who played football for Sammy Baugh in college at HardinSimmons and went on to play briefly in the AFL for the New York Titans. His post-playing career included work as a boom-or-bust oil driller, an enthusiastic evangelist and, finally, as a questionable investor.

2015 Player Deaths. A list of the pro football players who died last year, including information on the team(s) they played for, the date and location of their death (if known) and their age when they passed away.

Remembering Chuck Bednarik: Better Than the Best by Jared Kraus. A look back at the Philadelphia Eagles triumph in the 1960 NFL Championship Game and the heroic role played by the aging Hall of Famer Chuck Bednarik, the last of the leagues Sixty-Minute Men. 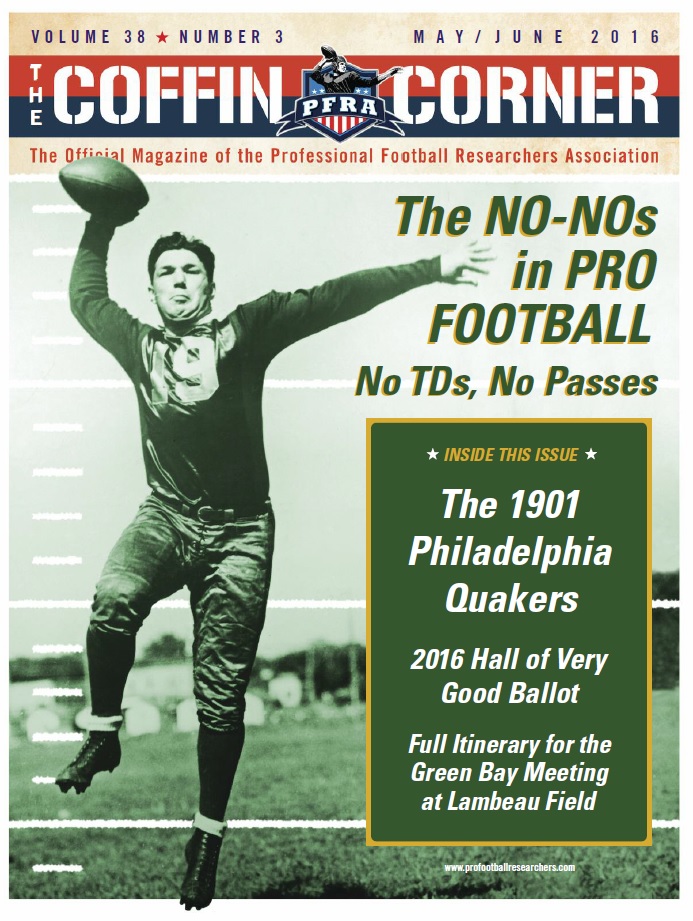 PFRA-ternizing. A report from PFRA member Jeff Miller on the recent Western New York chapter meeting and an announcement on member Greg Tranters donation of his large personal collection of Bills memorabilia to the Buffalo History Museum.

The 1901 Philadelphia Quakers by Ken Crippen. A summary of the first (and last) season of the first all-professional football team in Philadelphia. The story of this club, captained by Blondy Wallace, includes box scores, rosters and scoring from each game that year as well as season statistics.

No-Touchdown Games by John W. Lesko. An examination of the rare occurrence of games from three leagues (APFA/NFL, AAFC and AFL) where no touchdown was scored. The various reasons why this happened is covered and stories from select games are included along with a complete list of the 269 touchdown-free contests.

Passing Thoughts: Clarifying History and the Philosophy of the Forward Pass by Bert Gambini. Five games in NFL history have been played without one team attempting a pass  or is it four? The author looks at all the matchups on this very short list and uncovers evidence that one of the games (Detroit Lions vs. Cleveland Rams, September 10, 1937) may not belong on the list at all. 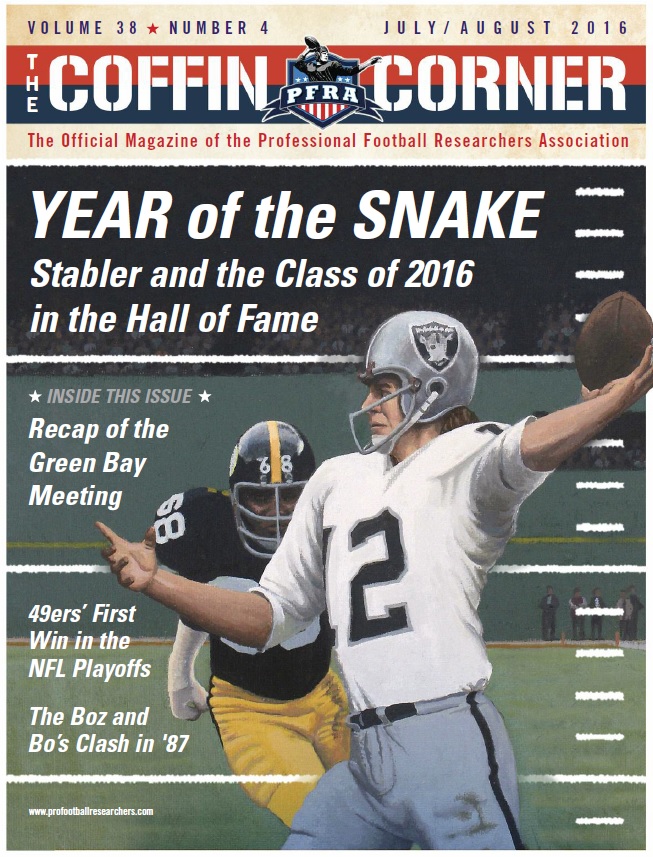 PFRA-ternizing. by George Bozeka. The organizer for the 2016 meeting covers the highlights of the weekend at Lambeau Field in Green Bay, including the release of The 1966 Green Bay Packers, the first book in the PFRAs Great Teams in Pro Football History series. Photographs by Mark Palczewski illustrate the recap of this event.

The Class of 2016 by the Pro Football Hall of Fame. A short biography, highlights, statistics and awards from the football careers of the eight members in this years Hall of Fame class.

Panning for Gold: The 49ers First Win in the NFL Playoffs by Joe Zagorski. A look back at the victory by MVP quarterback John Brodie and San Francisco over the Minnesota Vikings Purple Gang in the 1970 NFC divisional round to clinch the franchises first postseason win in league history.

The Boz Knows: In Defense of Brian Bosworths Performance in Week 11, 1987 (and to Some Degree His Entire Pro Career) by Ted Kluck. The author watches videotape of the famous Monday night clash he saw as an eleven-year-old between the controversial Seahawks linebacker and the phenomenal Bo Jackson, running back for the Raiders, now with an eye towards history. 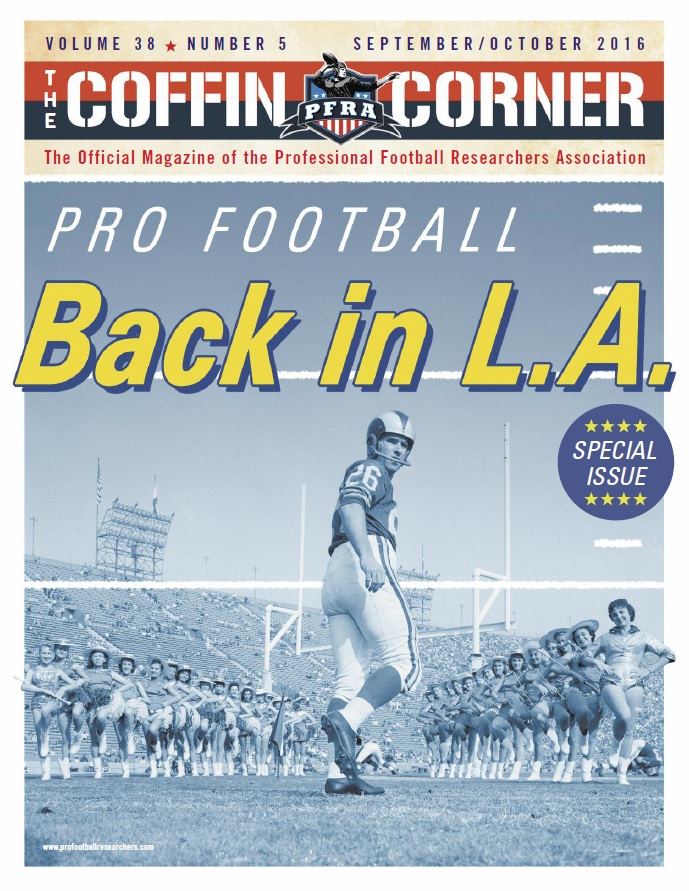 The Rams First Move to Los Angeles by James C. Sulecki. Adapted from a newly published book, this is the story of the Cleveland Rams journey to the West Coast exactly 70 years ago and the intense negotiations required to gain permission to play in the citys famed Memorial Coliseum.

The Rams AllCareer-Year Team by John Turney. The best individual seasons by position in the history of the Rams organization as selected by the online Pro Football Journal and covering the years in Cleveland, Los Angeles and St. Louis. The list includes first- and second-team players on offense, defense and special teams.

Decline and Fall of the 69 Rams: Personality Conflict by Bert Gambini. A behind-the-scenes look at the 1969 Rams, who experienced 11 straight wins followed by four straight defeats and the fractious relationship between owner Dan Reeves and head coach George Allen.

How the West Was Won: Rams vs. Vikings in the 1969 NFL Western Title Game by Ed Gruver. A retelling of the Western Conference playoff that pitted a rollercoaster Rams squad against a tough Vikings team on a bitterly cold December day in Minnesota. L.A. would end its season in disappointing defeat while Minnesota would go on to represent the NFL in the last Super Bowl before the merger. 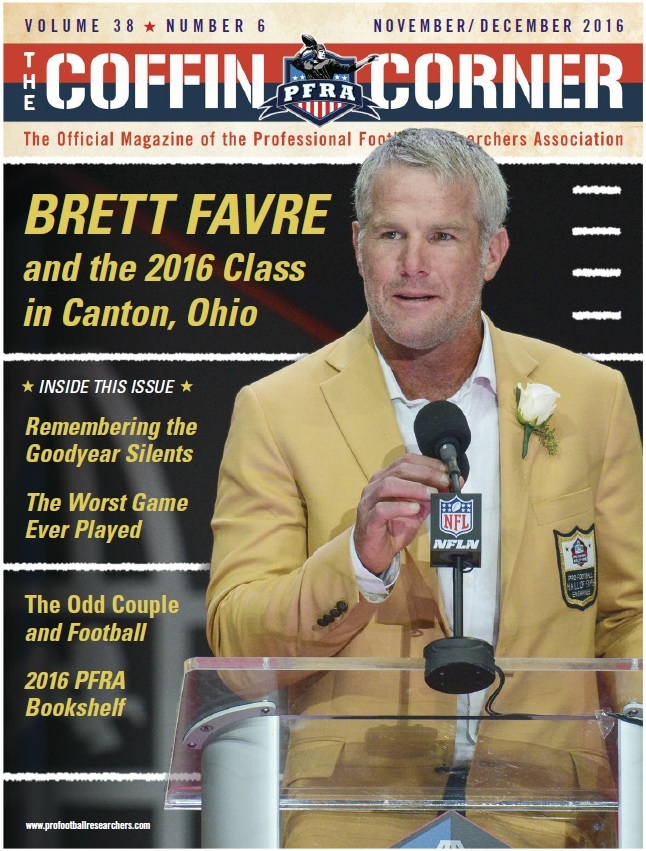 2016 Pro Football Hall of Fame Enshrinement Festival Photo Essay by Mark Palczewski. Photographs from this years Hall of Fame Weekend in Canton, Ohio by the official photographer of the PFRA.

The Gridiron Greats from Goodyear by Lee Elder. A short history of the factory teams formed by employees of the Akron, Ohio-based Goodyear Tire & Rubber Company with an emphasis on the Goodyear Silents, a team comprised primarily of deaf workers who achieved remarkable success on the football field.

Worst. Game. Ever. by Greg Tranter. A not-so-fond look back at one of the worst-played contests in the three-week stretch of replacement games in October of 1987 during the NFLPA strike that pitted the hapless New York Giants against the inept Buffalo Bills, a team so bad they were christened Counterfeit."

The Odd Couple and Football by David Krell. Rewind back to that 70s show with this recollection of the football players and personalities who appeared with Felix and Oscar on the popular sitcomcelebrities such as Howard Cosell, Alex Karras, Deacon Jones and Bubba Smith.

2016 PFRA Bookshelf by John Maxymuk. A bibliography of books on professional football (with a few notable exceptions) published or scheduled to be published in 2016, including highlighted titles by PFRA members.