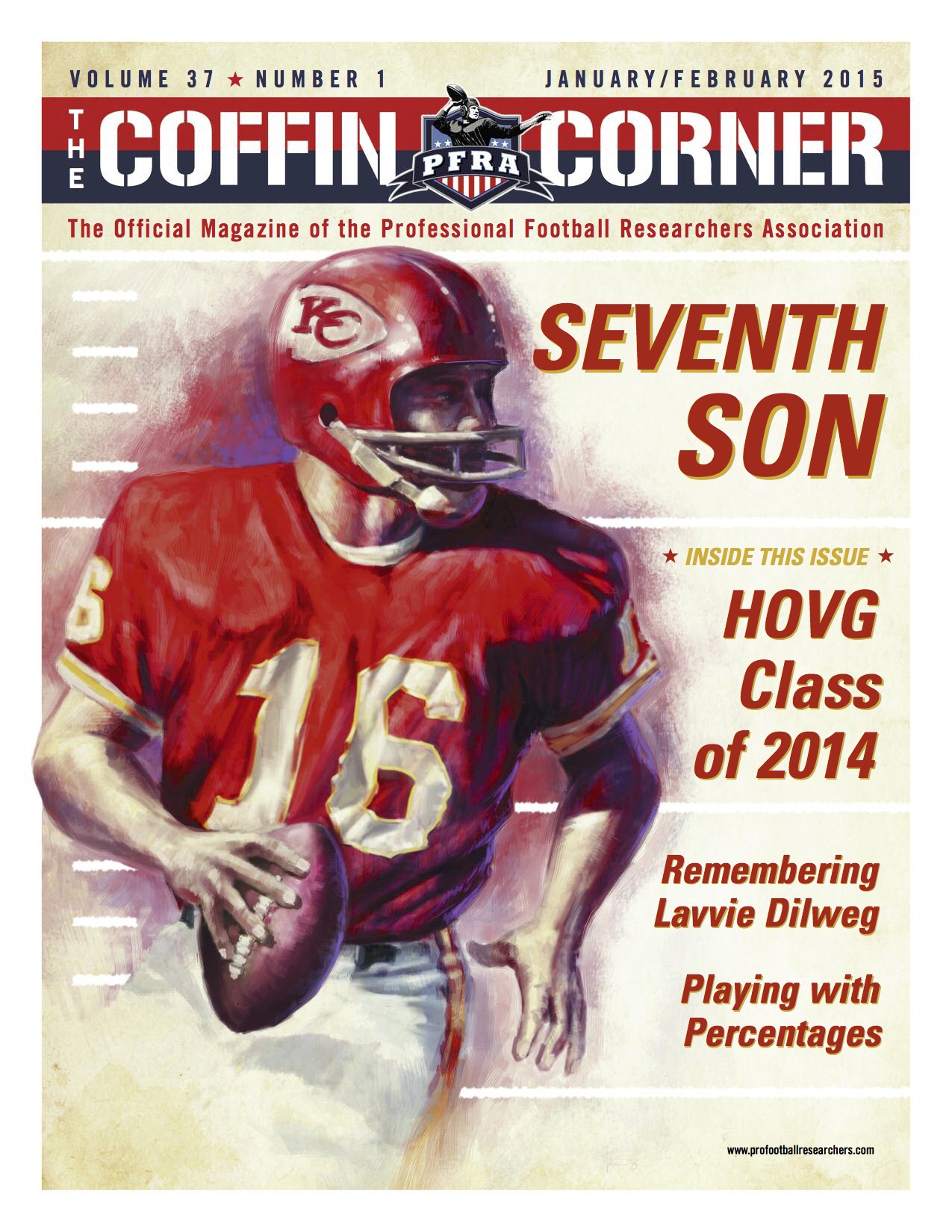 PFRA-ternizing A wrap-up of the PFRA meeting in Cleveland, a discussion on the PFRA website and the announcement of PFRA elections.

2014 PFRA Award Winners. The announcement of the winners of the PFRA Ralph Hay Award, the PFRA Nelson Ross Award and the Bob Carroll Memorial Writing Award.

Lavvie Dilweg: The Best End We Ever Forgot - Bob Carroll. (Coffin Corner Classic) A biography of the Packers end of the 1920s and 1930s.

Playing (Back) The Percentages - Mark L. Ford. The first part of an entertaining look at teams' win-loss records by season (or winning percentages). 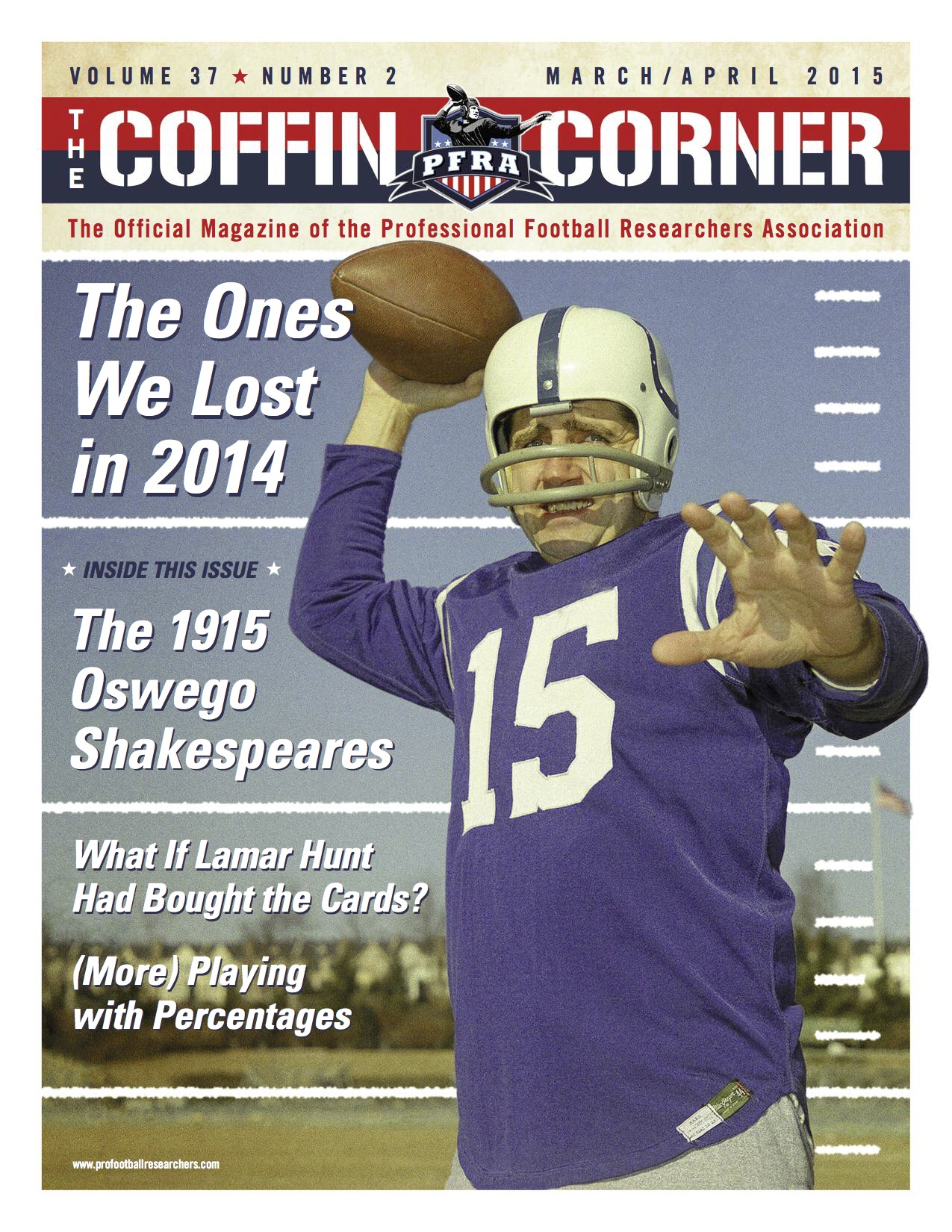 PFRA-ternizing. An update on membership count for the PFRA, numbers on the official PFRA Twitter feed and a recap of a local chapter meeting in Southern California from PFRA Secretary Lee Elder.

The Oswego Shakespeares and the Disputed 1915 Title by Doug Bigelow. A recounting of the 1915 season for the pro team from Oswego, New York and its claim to the title over the Fulton Nondescripts for the league located in northern and central part of the state.

Hunt Buys Cardinals, Moves Team to Dallas by Mark Speck. An amusing what-if story tracing the possible implications if the NFL had allowed Lamar Hunt to purchase the Chicago Cardinals franchise before he started the rival AFL.

Remembering Malcom Glazer by Denis Crawford, illustrated by Jared Kraus. A short tribute to the Tampa Bay Buccaneers owner who passed away last May.

2014 Player Deaths.. A list of the pro football players who died last year, including information on the team(s) they played for, the date and location of their death (if known) and their age when they passed away.

Playing (Back) the Percentages: Part Two by Mark L. Ford. The second part of an entertaining look at teams' win-loss records by season (or winning percentages) covers the teams under .500 and contains, not surprisingly nearly every defunct franchise in the NFL. Losers? Definitely. Lovable? Well, you be the judge. 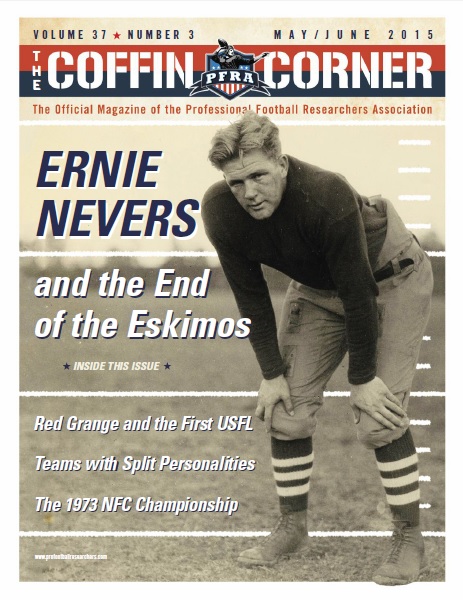 PFRA-ternizing Updates on the PFRA elections for this year, the Hall of Very Good finalists for 2015 (including an official HOVG ballot) and the PFRAs biennial meeting in Green Bay next year.

Red Grange and the First USFL by Ken Crippen. A summary of the (mostly) unsuccessful rival leagues that sprang up at the end of World War II to compete with the NFL with a focus on the short-lived United States Football League and its short-termed president, Red Grange, including transcripts of a memo and letter from USFL officials.

Split Personality Teams and Schedule Strength by Jeffrey Eby. An examination of NFL teams since the 1970 merger that exhibited split personalitiesthat is, good teams that lost to bad teams and vice versa, or middle-of-the-road teams with upset wins and losses. An analysis of strength of schedule, strength of victories (and defeats) and a new Split Personality Rating are included.

The Last Stand of the Duluth Eskimos by Michael Moran. A window into the dying days of the NFLs Duluth franchise through two key historical documentsa 1927 contract with the Chicago Bears for their final game and a 1929 letter on Ernie Nevers Eskimos stationary asking Johnny Blood McNally to sign a contract in the hopes of keeping the club alive.

The 1973 NFC Championship: Memories, Miscues and Missteps by David Neal. A nostalgic look back by the author, in attendance as a young teen, at the conference championship game between the Minnesota Vikings and the Dallas Cowboys that featured a mistake-filled, if not hard-fought, second half with an incredible ten turnovers. 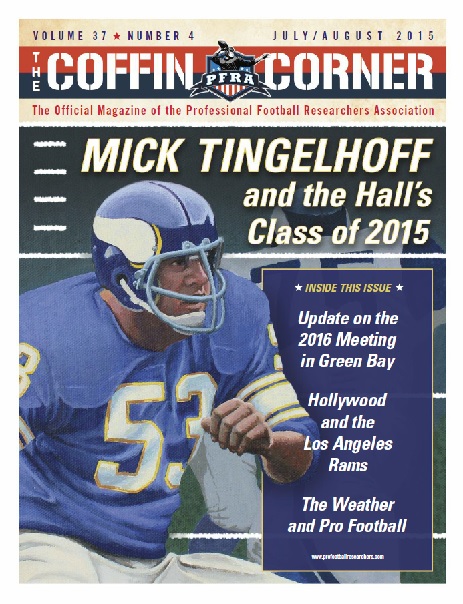 PFRA-ternizing Detailed information on the upcoming 2016 PFRA meeting in Green Bay including cost and hotel information.

The Class of 2015 by the Pro Football Hall of Fame. Highlights, statistics and awards from the football careers of the eight members in this years Hall of Fame classJerome Bettis, Tim Brown, Charles Haley, Bill Polian, Junior Seau, Will Shields, Mick Tinglehoff and Ron Wolf.

Running (and Passing) to Extremes: The Weather and Pro Football by Mark Wald. An analysis of the problems with historical data of pro football games and and a presentation of the research to correct the record. The author includes charts listing the coldest (both by air temperature and wind chill), hottest and windiest games on record and the number of outdoor games with significant rain or snow. 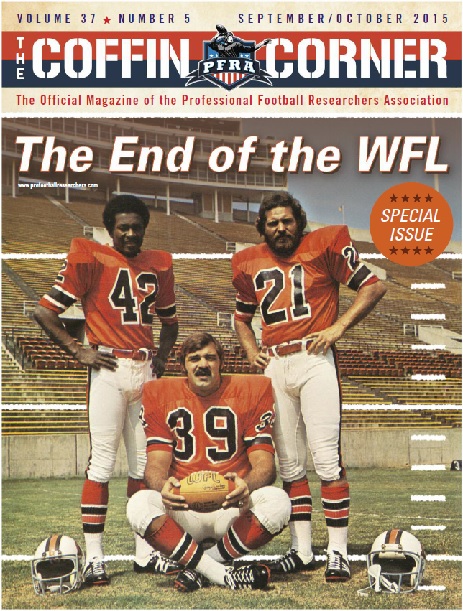 PFRA-ternizing A reminder on the PFRA elections and the Hall of Very Good balloting (both deadlines are October 31), an update on the PFRA book about the 1966 champion Green Bay Packers and a report on a 1920s-era pro football game featuring a tribute to the Rock Island Independents organized by PFRA member Simon Herrera.

A Bright New Look or the Same Old Game? by Mark Speck. A comparison of offensive and special teams numbers between the more established National Football League and the upstart World Football League from 1973 (the year before the WFL started) to 1975 (the year the league folded).

An Alternate World (Football League) by Mark L. Ford. An amusing what if tale that imagines how pro football history might have changed had the financially troubled WFL been able to stay solvent past 1975 and the weird, but strangely familiar, events that may have occurred through the rest of the decade and into the 1980s.

O Canada: Johnny Bassetts Coup by Denis M. Crawford. An account, chronicled with first-person interviews, of one of the founding owners of the WFL who lured three Miami DolphinsLarry Csonka, Paul Warfield and Jim Kiickup north to join the WFL in Toronto (then south to Memphis) in an effort to help jumpstart interest in the fledging WFL. His efforts, while initially successful, ultimately failed, as did the league itself. 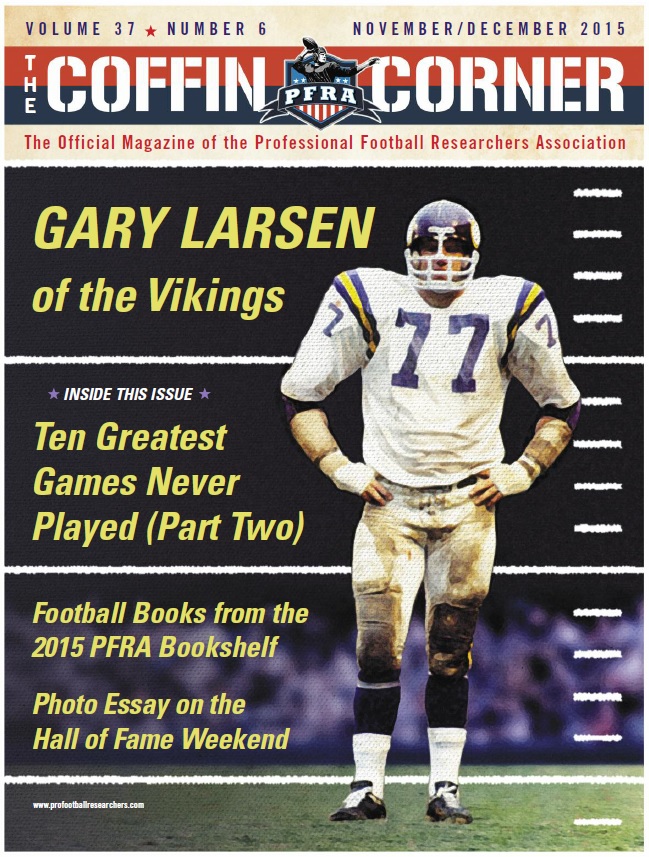 2015 Pro Football Hall of Fame Enshrinement Festival Photo Essay by Mark Palczewski. Photographs from this years Hall of Fame Weekend in Canton, Ohio by the official photographer of the PFRA.

PFRA-ternizing The results of the elections to the PFRAs offices, a reminder to renew annual memberships and an update on the 1966 Green Bay Packers book being prepared for next years meeting, including a sneak peek at the cover.

Coffin Corner Extra Point A new feature of the magazine that highlights the short-form research of our members. This installment is a brief look at the football career of former St. Louis Cardinals quarterback Tim Van Galder and the long wait he endured before actually starting.

The Ten Greatest Games Never Played: Part II by Ed Gruver. An entertaining look (continuing a 2002 article in Volume 24, Number 1) at the potential epic clashes between dominant teams in football history that might have occurred were it not for a simple twist of fate.

The Norse Nightmare: A Biography and Interview of Gary Larsen by Matt Reaser. An up-to-date profile of the Minnesota Vikings defensive tackle, a feared member of the teams famed Purple People Eaters defense from the 1960s and 1970s.

PFRA Bookshelf: 2015 Edition by John Maxymuk. A bibliography of books on professional football (with a few notable exceptions) published or scheduled to be published in 2015, including highlighted titles by PFRA members.